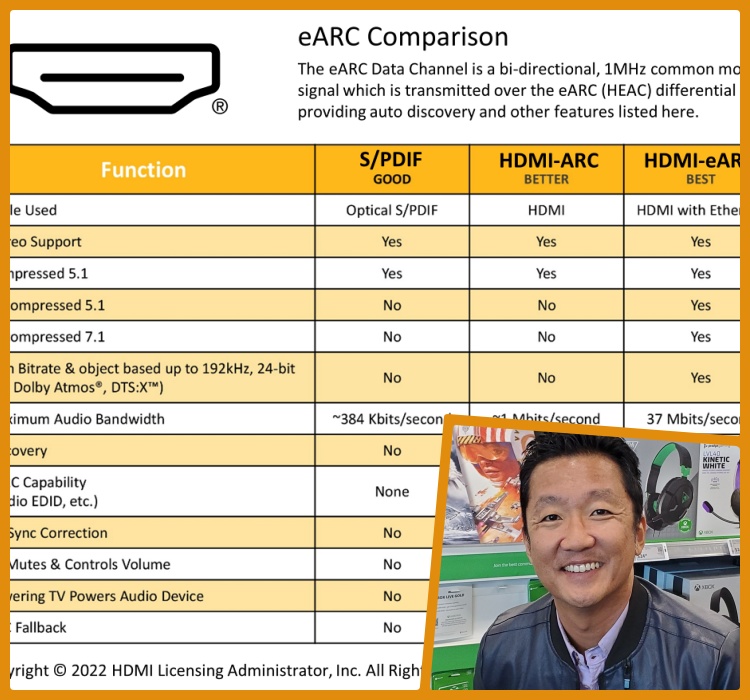 Say “HDMI” to somebody and the first thing that comes to mind is probably a cable. But there’s far more to the audio-video interface than that.

HDMI LA is the licensing agent that makes sure nearly 1,900 manufacturers of HDMI® products—ranging from connectors to cable, audio-video receivers and soundbars to smart TVs—are compatible.

Jeff Park, HDMI LA CTO, looks back on the development of the interface and where HDMI technology stands today, and in particular, its support of the latest advanced audio formats in this Q&A interview.

Q: Can you look back to the beginning of HDMI technology and how its development has addressed the changing needs of consumers when it comes to audio?

Jeff Park: HDMI’s origin was during the times of the HD transition. Audio was analog back then;  one of the things we wanted to do with HDMI audio was solve some pain points.

Back then, if you wanted to use Surround Sound, you’d need to run one cable per channel over analog. For video, you had DVI or some other analog connection. We created HDMI technology to simplify that. When we saw an HDMI solution could do both audio and video, we got rid of 10 plus cables.

As more products were developed and smart TVs began rolling out, we needed to output some higher quality and/or surround sound from the TV, for example.

Previously, you would run HDMI cables from an external box. If you wanted to output the TV’s audio from a tuner or some app, you had to run a separate cable as an audio output from the TV. The original ARC, or Audio Return Channel, was to simplify connectivity. It enabled using an HDMI cable both from the source to the TV and the TV audio output to the sound system.

Fast forward to today. There are formats like object-based audio, such as Dolby Atmos and DTS:X. These significantly increase the bandwidth required. That’s where eARC, or Enhanced Audio Return Channel, comes in and why it was developed—to support these requirements and remove ARC bandwidth restrictions. Now with eARC, highest quality audio can pass through in both directions.

Q: Is consumer demand for higher resolution 4K and even 8K TV displays feeding the desire for object-based audio to keep up with higher image quality?

JP: Absolutely, but actually the desire for higher quality audio precedes 4K. There has always been a desire to be able to have the flexibility to not only send audio from a source device to an AVR [audio-video receiver] then to a TV for the best experience, but as smart TVs proliferated and online streaming services started to grow, there has also been a desire to get the same high quality audio experience out of the TV without additional complexity.

Soundbars improved and sound systems got smaller, yet they still maintained a high-quality audio experience for consumers. People wanted the ability to somehow get the high-quality audio beyond, what I call legacy Dolby Digital, DTS—the stuff that’s existed for decades.

When object-based audio—like Dolby Atmos, DTS:X and others—came out, there was a desire for flexibility beyond having to install a full surround sound system with multiple speakers. If I have a smart TV and I have a sound system—whether it is a soundbar or even a complete seven speaker setup—I want the flexibility to use the TV as the center of the entertainment system and just a single HDMI cable to do everything, including the full capability of HDMI features, which means things like object-based audio or up to 32 channels of uncompressed audio.

JP: One of the most common uses is with smart TVs. These days, you don't need to buy an Apple TV, Roku or Amazon Fire TV stick, for example, to get your video apps. Before smart TVs, you had to get your TV and an external device, which is no longer the case.

If I want high-quality Dolby Atmos –whether it’s from Netflix or any other service that supports it—nowadays, I can just buy a high-quality soundbar and use a single HDMI connection on my TV to my eARC port and get Dolby Atmos.

It’s super simple. A single HDMI cable and a TV, and you have full surround sound capability as well as object-based audio capability at the highest quality level available today. eARC enables this in the simplest way possible. It enables bidirectional audio and doesn't really have any audio bandwidth restrictions—at least in terms of what is needed today and for the foreseeable future.

Q: When it comes to ARC and eARC, can consumers be certain the implementation of one consumer electronics manufacturer will guarantee compatibility with HDMI products from other CE vendors?

JP: Just like everything concerning HDMI products, there's a compliance test specification. It is not optional. Manufacturers must go through compliance testing to determine they have met the requirements.

But we don't test for all sound formats. That’s dependent on the device itself since not all devices support all known audio formats. You might have a TV that supports Dolby Atmos, and some other TVs may not, for example. The same may be true of DTS:X. As long as consumers make sure their sound systems support what they want, they will be OK.

But ensuring functionality and interoperability between devices is fundamental to our specifications and programs.

Q: Can you offer a few more details on your programs?

JP: I mentioned compliance which can include working with the HDMI ATC [Authorized Test Centers] on testing and certification and following up with our Adopters and manufacturers in several ways. That’s part of it, but just a small portion of everything we do. We also educate the market. We disseminate as much information as possible to both manufacturers, resellers and consumers for people to understand how to alleviate some of the confusion in the market.

We also have compliance enforcement –the people who put the hammer down. That may mean sending unpleasant letters to make sure a company does what it’s supposed to do or if companies don’t cooperate, don’t want to make things compliant and remain out of compliance, we can take a number of other steps, including seizing products at the border with the help of government agencies such as CBP [Customs and Border Protection] as one example. We have relationships with CBP and other similar agencies of various nations globally. That doesn't happen very often, but from time to time, there are bad actors.